Toronto due for double-digit market rent increase in 2019

Toronto due for double-digit market rent increase in 2019

Toronto landlords with vacant units could enjoy as much as an 11% hike in rent next year.

That’s according to Rentals.ca’s National Rent Report, which only studied empty units and also forecasted that rents nationwide would increase 6% in 2019.

Ben Myers, president of Bullpen Research & Consulting Inc., notes that the breakdown in Toronto is pretty evenly split between purpose-built rental apartments, which skew older, and newer condominium rental units. He also says that Toronto chronically under-delivers the number of units needed every year, and it’s contributing to rising rents.

“Renters like a higher level of finish and newer amenities, and some of the older buildings might be larger but they’re not providing the lifestyle some of these renters are looking for,” added Myers.

The preponderant reason for the double-digit market rental hike in Toronto has to do with the economics of purchasing a condo unit in the city. In downtown Toronto, investors are buying in at between $1,000 and $1,200 per square foot, and in order to stay cash flow positive they will need to increase rents considerably.

Of course, that’s compounded by a growth in the number of renters. Since the B-20 mortgage stress test was introduced in January, many people are precluded from homeownership. Making matters worse for would-be purchasers, Canada has officially entered a rising interest rate environment.

Davelle Morrison, an investor-landlord and sales representative with Bosley Real Estate, says her biggest challenge in 2018 has been keeping up with the number of prospective tenants who contact her for rentals, whether her own or her clients’.

“There was a one-bedroom in Leslieville that had over 90 inquiries,” she said. “Another property, a two-bedroom condo at Yonge and Summerhill, had over 30 people show up at an open house. The challenge for landlords right now is keeping up with demand because so many people are looking.”

After Kathleen Wynne’s Liberal government, voted out of office earlier this year, introduced rent control, many landlords sold their units to end-user purchasers, and that flooded the marketplace with even more tenants looking for rentals, says Morrison. 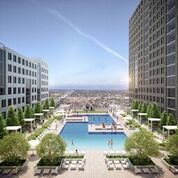